Andreas Mikkelsen is a Norwegian rally driver. He is a two-time Intercontinental Rally Challenge champion, having finished first in 2011 and 2012.

He contested eight rounds of the World Championship for Volkswagen Motorsport in 2012. Since 2013, Mikkelsen has been behind the wheel of the VW Polo R WRC, scoring third place in the championship for three consecutive years between 2014 and 2016. He claimed wins at Rally Poland and Rally Australia in 2016. His season-closing Australia victory gave VW an emotional win in their last ever WRC race before withdrawing from the series in 2017.

This talented driver didn’t stay without a team for long though. He contested much of the 2017 season with Citroën before transferring over to Hyundai for the final three rounds of the campaign. After three years with Hyundai and a number of podium finishes, Mikkelsen made the move to Škoda for the 2020 season and took first place at Rally Hungary in the European Rally Championships.

For the 2021 campaign, Mikkelsen remained with Škoda and chose to contest the first half of the season in WRC2, starting the year with a comprehensive victory at the Monte Carlo Rally.

Mikkelsen added another string to his bow in 2022 when he was called up at the last minute to drive in the Dakar Rally as a replacement for Mitch Guthrie Jr. Hugely experienced co-driver Ola Fløene was on hand to assist during his Dakar experience, which ended in withdrawal on stage four in Saudi Arabia.

🇳🇴 WRC Driver
Join Team Mikkelsen
We are happy that you want to drive for a better world
FIA SDC is available in App store and Google Play. 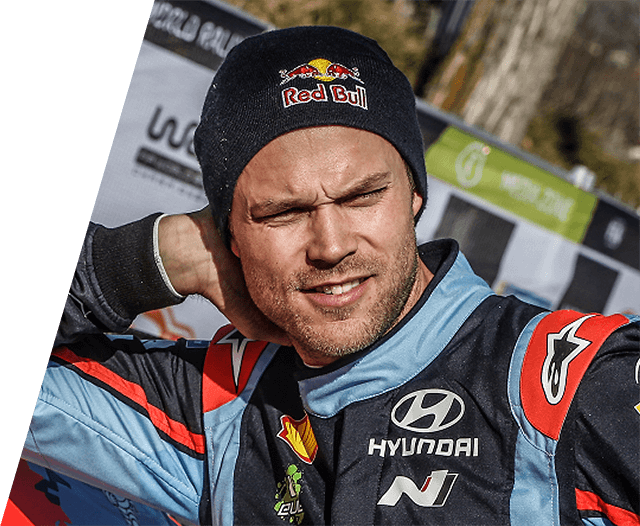 Interests
Motocross, Alpine-skiing, fishing and all sports in general.

What music do you like to listen to when you drive?
I listen to all kind of music when I drive but I would say I mostly listen to pop and electronic dance music.

Do you have any mileage that you fancy the most to drive, why this one?
I always enjoy driving in my hometown Oslo when back in Norway. I'm traveling quite a lot, so too me it's always nice to come home. However, I also enjoy driving in the alps since the views there are amazing.

What is your best tip to drive smart?
I always make sure to have plenty of space to the cars in front of me. That always saves you from many situations and allows you to drive more comfortably, smartly and efficiently.

Why should anyone join your team?
It’s an honor to be selected as team-leader in this exciting project! I am competing at the elite-level of motorsport, and if I, as a driver, can inspire others to become smart, safe and environmental-friendly drivers, I’m happy to do that. Join my team today, and let’s drive smarter!

Join Team Mikkelsen
Join us to drive for a better world
The FIA SDC app is available in App store and Google Play.

Discipline: Rally
Country:
Winning is more important than participating, but this requires focus. Join me for the challenge!

Discipline: World RX & Extreme E
Country:
As a person I’m always competitive. On the roads in my normal car I respect the speed limits and drive safely, I always try to drive as eco friendly as possible. Not as easy as it sounds, and it keeps me focused.

Discipline: World RX
Country:
Driving smart is fun! It saves me money and reduces my impact on our precious environment.

Discipline: Rally Dakar
Country:
We all need to do what we can to make our roads safer, and also, this is gonna be really fun. Join me in the FIA SDC!
See all the teamleaders
This website stores cookies on your computer. These cookies are used to improve your website experience and provide more personalized services to you, both on this website and through other media. To find out more about the cookies we use, see our Integrity Policy.
Cookie SettingsAccept
Manage consent